Part 1 dealt with fundamental distinctions when speaking of norms: norms as propositions of ought, categorical and conditional (= hypothetical) norms, norms and norm instance, implicit and explicit validity of norms, norms as empirical facts from the external third-person perspective, norms as genuine, not descriptively reducible in the first-person perspective. Only the latter perspective is at stake in all that follows.
The second part dealt with a critique of legal logic, which tries to formalize legal conclusions, especially the legal syllogism, with the means of classical logic. Examples were used to show that these inferences are in principle non-monotonic or 'defeasible' and are based on a non-monotonic conditional, which cannot be handled by classical logic.
In part 3, the basic postulates of the logic of categorical norms were briefly explained. These form a subfield of philosophical logics, namely deontic logic, for which a standard system has emerged. It is structurally the same as doxastic logic (the logic of rational belief). Of course, all these logics are never free from objections.
The fourth part was about the extension to a logic of conditional norms. For this, one has to delve into the conditional logic developed since 1968, which is precisely about the non-monotonic conditional needed for formalizing legal inferences. This has developed into a branching field. An important approach, also advocated by Spohn, is based on the so-called Ramsey test and a doxastic interpretation of the conditional.
Part 5 explained that this approach is equally suitable for understanding conditional norms and their logical capture. Furthermore, it was explained what dramatic consequences it has for the self-understanding of legal theory if one takes this approach seriously. But it must be taken seriously. After all, the previous self-understanding based on classical logic has proved to be inadequate.
Part 6 was about Chisholm‚Äôs paradox, as it is called. In deontic logic, it is unclear how to deal with it appropriately. Spohn introduced it to explain a fundamental ambiguity that pervades all normative speech (and which, according to Spohn, underlies paradox): namely, the ambiguity between pure norms and fact-guided norms (by analogy with the distinction between intrinsic and extrinsic values, or "good in itself" and "good as a means"). Spohn‚Äôs remarks on the logic of conditional norms were equally ambiguous, but strictly speaking they could only refer to pure norms.
In the seventh part, an outlook was given on what would still have to be done in order to arrive also at a logic of fact-guided norms (which is almost always at stake in the legal context and at any rate in legal syllogism). For this purpose, a consideration of the so-called rank theory developed and propagated by Spohn for 40 years would be indispensable. The lecture concluded with the following 'take-home messages':

1. classical logic is no good for legal logic.
2. study the non-monotonic conditional.
3. distinguish strictly between pure and fact-guided norms. 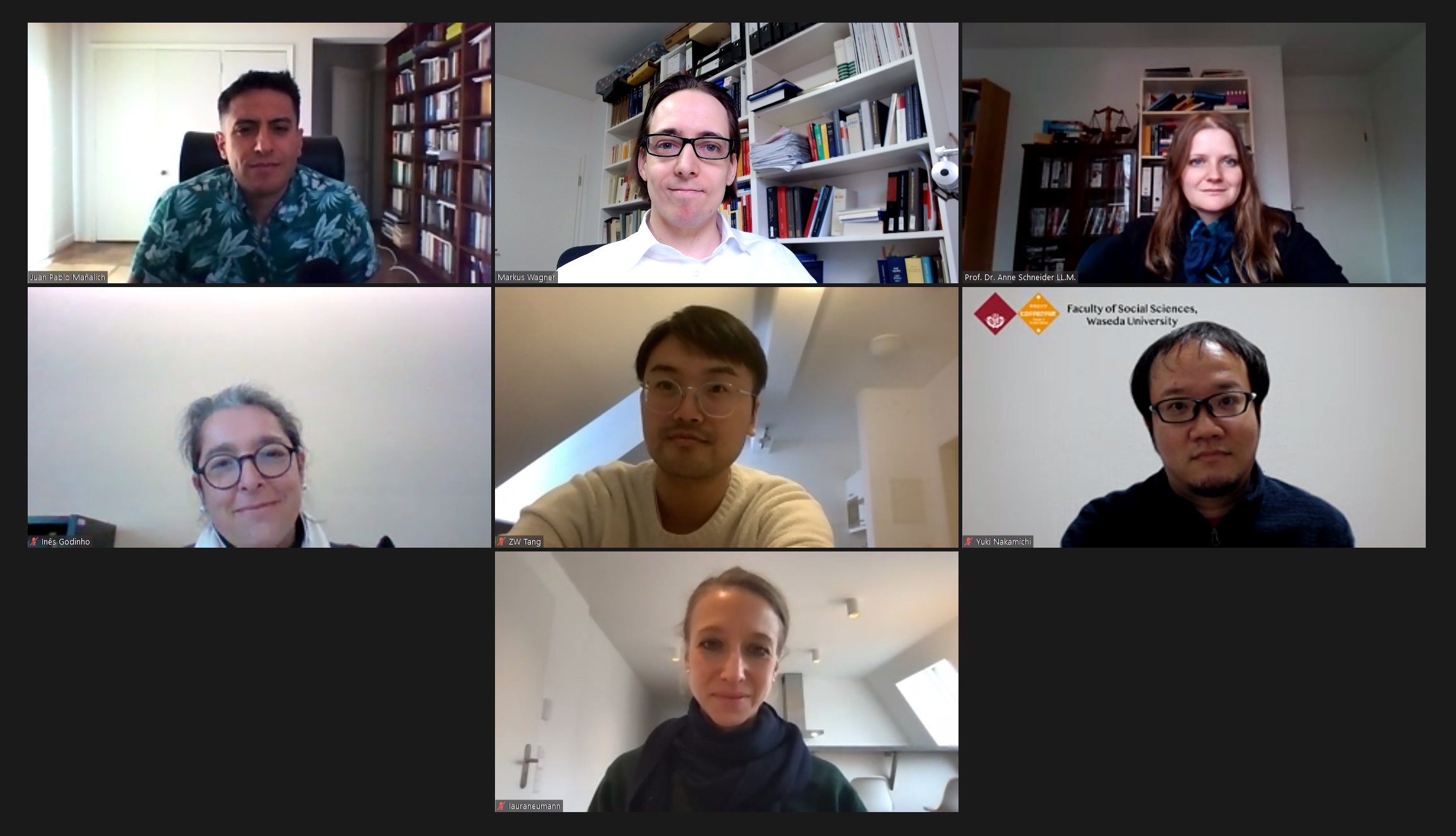 The aim of the lecture is to analyse the status of the principle of penal legality as a residual closure rule (‚ÄúRCR‚Äù), yet rejecting its more usual characterisation as a rule that would qualify every action that is not ‚Äúprohibited according to penal law‚Äù as ‚Äúpermitted according to penal law‚Äù. For this would imply that penal sanction norms ought to be categorised as regulative rules, whereas they ought to be taken, rather, as constitutive rules, the function of which is ‚Äì in Wesley Hohfeld‚Äôs terminology ‚Äì to institute liabilities-to-punishment that are correlative to punitive powers. (This renders intelligible why, already in the second edition of the first volume of his ‚ÄúNormen‚Äù, Binding renounced the understanding of ‚Äúpenal laws‚Äù as norms capable of grounding duties.)

The categorisation of penal sanction norms as constitutive rules finds decisive support in Hart‚Äôs conception of rules that establish legal sanctions as a subset of so-called ‚Äúsecondary rules of adjudication‚Äù, which in general may be understood as constitutive rules that specify the conditions, the form, and the consequences of the institutionalized application, and enforcement of the rules that make up the corresponding legal system. Among these, (penal) sanction norms are rules ‚Äúspecifying or at least limiting the penalties for violation‚Äù of the primary rules of obligation that they reinforce. The applicability of a penal sanction norm consists in that someone whose (imputable) behavior has fulfilled that norm‚Äôs antecedent condition comes to occupy a specific institutional position, which corresponds to a (Hohfeldian) liability, the correlative position of which must be a (Hohfeldian) power. Thus, a penal sanction norm is a constitutive rule that, by correlating the realization of its antecedent condition with the imposition of a penal sanction, institutes ‚Äì in Binding‚Äôs words ‚Äì a ‚Äúpunitive equivalence‚Äù.

This takes us back to the initially stated problem, which consists in fixing the exact sense in which the principle of penal legality may be regarded as an RCR. The rules that make up a system capable of being closed through an RCR, on the one side, and the RCR itself, on the other, must be categorially homogeneous: a rule capable of closing any given system of rules needs to be of the same kind as the rules that make up the system closed by that rule. If one further distinguishes between ‚Äústrong‚Äù and ‚Äúweak‚Äù (Hohfeldian) positions, i.e. positions grounded by rules that belong to the normative system under consideration, on the one hand, and positions resulting from that same system not containing rules that ground the corresponding contradictorily opposite positions, on the other, that leads to the following result: the principle of legality must be understood as a constitutive RCR, according to which anyone who is not punishable under a legislatively formulated sanction norm is unpunishable.

I. Discussion on the concept of norms and the general norm theory in China

The predominant understanding of norms in China is based on the sanction theory of norm, which can be traced back to Soviet-Russian state and legal theory. Based on this, the doctrine of the dual nature of criminal laws is predominantly represented in the field of criminal law. According to this, criminal laws are, on the one hand, the decision norms directed at the judge, and on the other hand, the conduct norms directed at the general public. In contrast to the distinction between conduct and sanction norms in the sense of the German tradition since Binding, according to the dual nature doctrine of criminal laws, conduct and decision norms are two sides of the same coin that are not independent of each other. This understanding of criminal law norms has exerted an influence on the conventional four-element theory of crime that can hardly be overestimated, which ignores the different structures of conduct norms and sanction norms, and the hierarchical relationship between the two types of norms.

The conventional understanding of norms should have been countered by the more recent legal theory reception from Japan and Germany. However, it has not yet happened because norm theory has so far only been a marginal figure in the exchange of legal theory and a large number of misunderstandings already arise in this limited and selective science transfer.

III. Future prospects for the development of norm theory in China

Without reservation, norm theory can be fruitful for the discussion of criminal law dogmatics in China. In addition to the dispute regarding the doctrine of wrongdoing (Unrechtslehre), norm theory can be helpful in solving a number of other dogmatic issues, such as the quantitative elements in most Chinese criminal offences. In any case, it is particularly useful if a clear line of development and the different positions of the norm theory ‚Äì or more precisely, the norm theories ‚Äì can be clarified in advance. In this regard, the working group can provide relevant premises for the development of Chinese criminal law research.

The lecture explores norm-theoretical aspects in the legal thought of Joseph Raz (*1939). The focus is on the early work published between 1970 and 1985, which embeds an institutionalist theory of law (I.) in an overarching practical-philosophical context (II.). At both of these stages of his thoughts, there are touchpoints for questions of norm theory in the narrower sense.

Raz‚Äòs early work is strongly influenced by H.L.A. Hart‚Äòs classic ‚ÄúThe Concept of Law‚Äù (1961) and traces the "double institutionalization" (Paul Bohannan) of law. Its norm-theoretical equivalent is the distinction between primary and secondary rules. Crosswise to this classification are further categories of order for norms, in particular the distinction between mandatory and enabling rules or set norms and rules of practice.

‚ÄúPractical Reason and Norms‚Äù (1975) constitutes the Oxford philosopher‚Äôs main work on legal theory. It aims at the formulation of a theory of normativity appropriate to law, with the concept of the reason for action as its center of gravity. The most important norm-theoretical innovation consists in the interpretation of norms as "exclusionary reasons". In addition, Raz sketches a theory of norm-descriptive propositions (detached statements) that follows Hans Kelsen. Both topics have so far received little attention in Germany (but see Kuch, Die Autorit√§t des Rechts, 2016).

III. Between Realism and Skepticism

The overall approach seems to be characterized by a peculiar coexistence of realism and skepticism. Here, perhaps, an intellectual elective affinity between Joseph Raz and Ludwig Wittgenstein emerges, who (along with Max Weber) may be counted among the most important background figures of analytic legal theory.